The new chipset is an excellent upgrade over its predecessor (Snapdragon 865 series), mainly introducing the Super Cortex-X1 Core, integrated X60 5G baseband and an all-new GPU Adreno 660, makes it the most powerful chipset in the history of Qualcomm.

Currently, only the specifications are revealed. What will the specific performance be? We need to wait until the mass-produced model is equipped with the test.

Before that, let’s take a look at November. AnTuTu has revealed the list of best Android devices in terms of performance and benchmarks. This time, the statistics are from November 1st to November 30th, 2020. 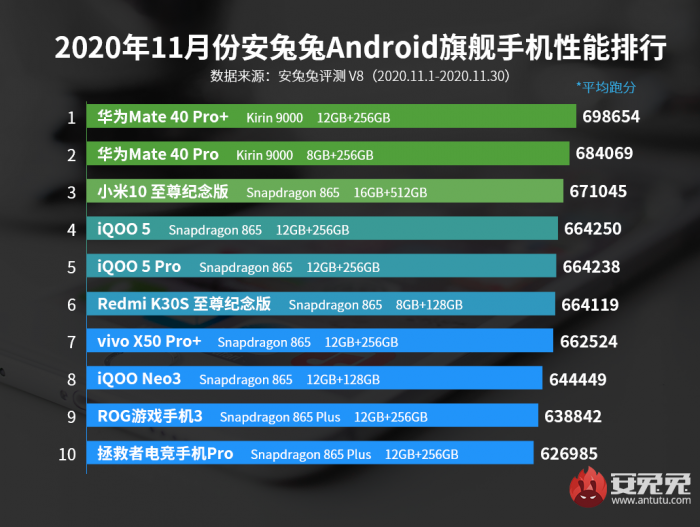 As shown in the list, the top two Android flagship performance lists are from Huawei’s Mate40 series: Pro & Pro+ version. The average scores are 698654 and 684069, respectively. It is the average score of all running points. The data shows that some Mate 40 Pro series do not turn on the system’s performance mode, so they do not use the full performance of the phone.

The iQOO 5 series is at 4th and 5th place because the Xiaomi Mi 10 Extreme Edition has been updating the GPU driver. Although iQOO also has this feature, the number of upgrades does not seem to be as much as Xiaomi.

Then we got the best performance list of Android devices in the mid-range segment. All the models in this list support 5G connectivity.

At first, we got Redmi 10X 5G standard version, which is the only phone, features Dimensity 820 5G chipset. Surprisingly, the Pro version of the Redmi 10X series has scored lower than its standard version (3rd place). It may be due to different storage variants that have been used.

Then we got Nova7 series devices at 2nd & 4th place. The Pro version is in second place, while the 4th one is its standard version. This phone comes with Kirin 985. On the 5th, we got Honor 30, which also uses the same chipset and same storage.

It is observed that Huawei chipsets have also performed well as compare to other companies’ chipset.