It was reported that Huawei is planning to launch a new device of its Enjoy 20 series along with its Nova8 series. Today, Huawei has officially confirmed that the new Nova 8 series is coming on 23rd December, but they didn’t reveal anything about the new device from the Enjoy 20 series. As per reports, the device would be named “Huawei Enjoy 20 SE”. 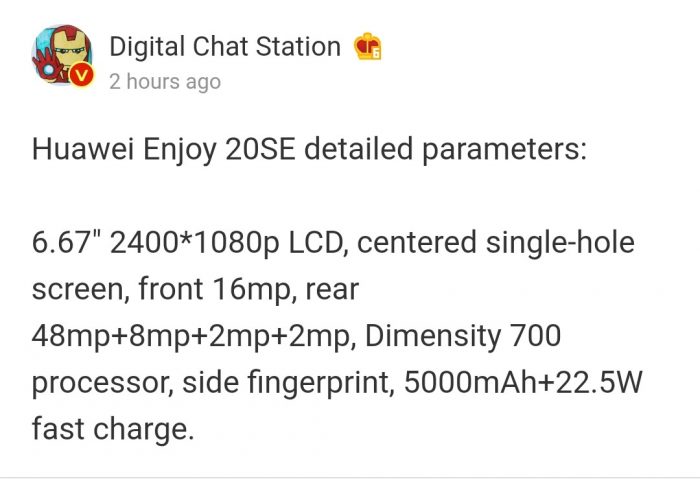 The famous Chinese blogger and leakster @Digital Chat Station have recently revealed Huawei’s upcoming Enjoy 20 SE’s specifications. As per blogger, the all-new phone is expected to feature a Full HD+ (2400x1080p) Single Punch-Hole Screen. The display sizes about 6.67 inches, and the punch-hole would be placed at the center.

A quad rear camera setup is expected to be featured with a main 48MP sensor in terms of camera. There are three other lenses (8MP+2MP+2MP) along with the primary camera lens. On the front side, a 16MP sensor is expected to be placed in the punch-hole

Inside the phone, the all-new Dimensity 700 chipset is expected to be equipped. Currently, no phone in the market features this chipset. The Dimensity 700 is an octa-core chipset based on a 7nm manufacturing process. The chipset has a maximum frequency of 2.2GHz with a Cortex-A76 core.

The blogger also mentioned that the battery capacity is about 5000mAh, while the device would also support fast charging (22.5W). A side fingerprint sensor in the lock screen button is also expected.

It is expected that the new Enjoy 20 SE will be launched with the Nova 8 series, on 23rd December.