It is reported that a new model number, “XT2155,” from Motorola has been listed on various certification sites. As per those certifications, this model number would be named Moto E20, and for few regions, it would be known as Lenovo K14.

Starting from the Bluetooth SIG certification, this certification has revealed the naming of models (with Bluetooth 5.0 support), as can be seen. Furthermore, it is also mentioned that this model features Unisoc’s chipset, an entry-level chipset manufacturing company. 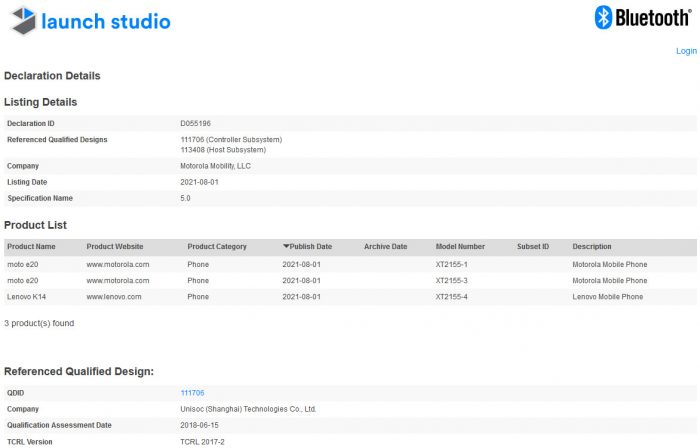 Then we have TUV Rheinland Certification; this certification has revealed the battery and its related specifications. As mentioned, the Moto E20 features a 3760mAh Li-ion (3.85V) Battery which supports charging up to 10 watts (5V/2A) only. This certification consists of many model numbers, as can be seen.

The applicant of both certifications is Motorola Mobility LLC. Previously, the same model was listed on FCC Certification with the same battery specs. In addition, it is also confirmed that the phone will feature the 4G LTE Network connectivity only.

Currently, we have no official news regarding the launch of Moto E20 (or Lenovo K14).