This morning, Redmi has revealed another highlight of the all-new Note 11 series. This time, the newly revealed highlight is related to the triple camera setup of the phone.

As seen in the image, Redmi (on official Weibo) has announced that the new Note 11 series will feature a main 108MP camera sensor from the trio of lenses. With a camera lens of more than 100MP, Redmi Note 11 series can easily achieve flagship standards in terms of imaging. Further, it also brings strong magnification support. 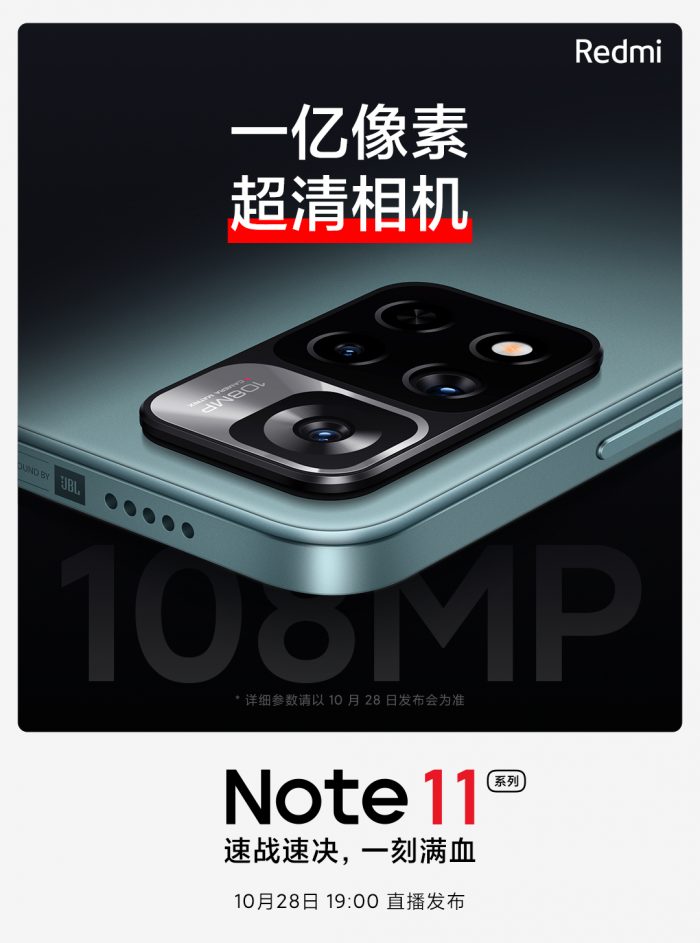 It is worth mentioning that the new 100MP imaging technology on Note 11 series brings the following highlights: It can capture 12000*9000 image resolution and a single-pixel as large as 2.1μm. It also brings the Dual ISO Technology, which makes the night scenes sharper. The users can surely shoot casually on a large-scale level.

In the past, we already have seen many mid-range devices using a 108MP sensor, but the 108MP lens of the Redmi Note 11 is something that shouldn’t be underestimated.

With the combination of other flagship-level specifications (like 120W charging, Pinhole AMOLED) and 108MP, the new Redmi Note 11 series will surely achieve the flagship standards at an affordable price tag.

The previous announcements revealed that the new Redmi Note 11 series would feature a flat edge frame with Pinhole AMOLED Display (manufactured by Samsung) that comes with a higher refresh rate. The device also uses the AG (Anti-Glare) Glass material on the backside.

Moreover, the JBL branded Dual Speakers are also placed at the top, along with a 3.5mm headphone jack. The phone would also feature a side fingerprint scanner integrated into the lock screen button.

It is expected that the officials will reveal more highlights in the near future. The new Redmi Note 11 series is confirmed to be launched on October 28 at 7 PM (Chinese Timing).