The Huawei Mate RS has been on sale on April 14, 2018. With outstanding appearance design and excellent performance, this flagship product has attracted attention from the public. Today, we will start the teardown of the Huawei RS to explore its internal design and workmanship.

First of all, remove the SIM card tray. Heat up the back cover for five minutes before take it out. The top and bottom of the back cover are fixed by glues, so we need to be careful when removing the back cover.

There is no other electrical component integrated on the back cover except the fingerprint reader module. The motherboard is covered by heat dissipation material, which is to avoid heat congregation. A layer of foam has been placed in the gap between the battery and back cover.

Before removing the plate on the top, we need to take out the LDAF module on the camera or the cable will be disconnected. Besides, we also need to remove the LED detective module.

The right part of the plate is covered by thermal grease, which is used to help chip’s heat dissipation. Connectors are designed with foam mats to prevent connectors from poor contact.

Next, disconnect connectors of vice board cable, button cable, display cable, touchscreen cable on the bottom of the motherboard.

It is reported that three cameras that the Huawei P20 Pro all support OIS function. After the test on this phone’s three cameras, we find that only the telephoto camera adopts OIS technology while the rest two cameras don’t adopt it.

Although the front camera is smaller than the main camera, it is not small compared with other front cameras. As we all know, this smartphone features the 24MP front camera which has F/2.0 aperture.

These are some chips that this smartphone uses. Most of these chips the Huawei RS uses are the components that the P20 Pro adopts. The phone’s motherboard is smaller than the P20 Pro’. In addition, bare circuits on the motherboard have been well protected.

There are three main chips integrated on the back of the motherboard, including RAM, processor and ROM. The memory chip and AI Kirin 970 processor are sealed together. The battery charging management adopts currently popular TI BQ25892 chip.

The power management chip and a lot of filter capacitors are placed on the side of the motherboard.

We find that this phone has a design which is better than the iPhone X adopts. It chips which generate lots of heat are placed on the outer layer of the motherboard. In this way, heat dissipation material can be utilized to help these chips have better heat dissipation performance. The iPhone X even places its processor in the inner of the motherboard.

Red rubber is placed around the port of the loudspeaker. The dustproof net uses the material with a glossy surface and small dense mesh. It is inferred that this material is similar to what the Samsung S8 has adopted. This material can keep vapor outside and allow air circulation without affecting sound quality.

The loudspeaker is made by AAC Technologies Holdings Inc. It has excellent low-frequency performance.

It costs us the long time to tear down this phone than other Android smartphones. This phone has a complex design on the upper part. After this teardown, we have seen an all-new internal design for a phone. With good performance, this phone also has excellent heat dissipation performance and brings good sound.

According to the display cable, we know that this screen that this phone feature is provided by LG.

In general, the Huawei Mate RS is one of the smartphones in China which has a superior internal design. Although its price may scare away many people, undoubtedly this phone’s workmanship has reached the top level in China. 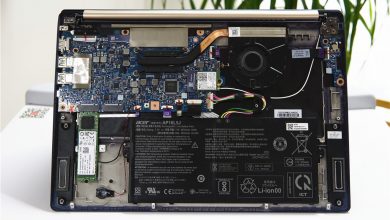 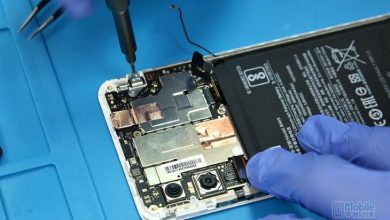