It is expected that Apple will reveal its all-new iPhone 14 series in the month of September (2022). Like every year, the rumors and leaks regarding the upcoming series always get started to reveal in the current days (2nd Quarter of the year). And again, things went in the same way as we got a significant leak today.

This morning, the Protective Glass Films of the expected iPhone 14 series were revealed by the blogger @old tech (on Weibo). In the mentioned image, the design of screens in expected models can be observed. However, it is worth noting that Apple has no plans to launch the Mini model this year. 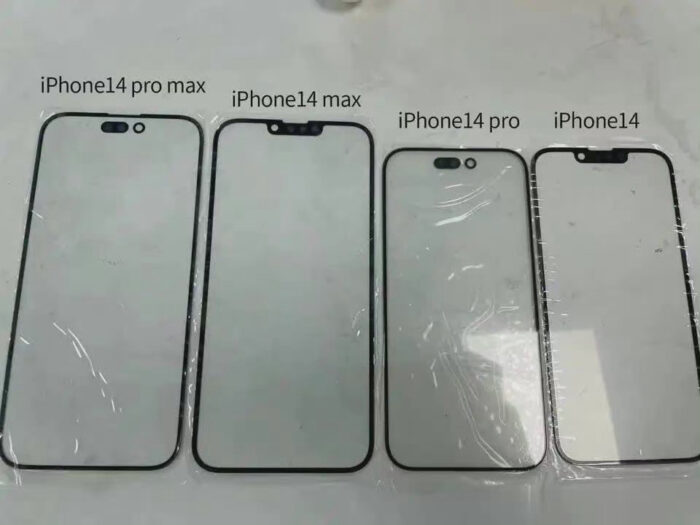 The standard iPhone 14 and 14 Max display’s design would be the same as in iPhone 13 series (with a small notch). However, in the case of Pro models, there is a Pill-Shaped cutout and a Punch-Hole on display. It is also observed that the bezels are now thinner when compared with iPhone 13 series.

Except for this, the image consists of no more information. But thanks to some sources, it is expected that the size of all four models would be similar to the previous lineup’s model. It is worth mentioning that the size of the iPhone 14 Max will be the same as iPhone 14 Pro Max’s size.

Moreover, it is also expected that this year’s models will feature a 48MP primary camera sensor for the first time in the history of Apple. On the front side, an improved sensor with autofocus is also expected. Moreover, the new Apple A16 chipset would be featured inside the new iPhone models.